Yuuuuup. I did that. This last week was my birthday week (yay happy birthday me!), as well as Payton’s All Star week (yay goo Payton!). I actually knew ahead of time how I was going to approach this week, and even let Adam (my coach) know that I was in fact, going to be an asshole this week. *shrugs unapologetically*

Luckily, I am in my improvement season, because I would never do this while in prep, even if it was my birthday. But nonetheless, this is what happened this week.

Well for one, I had an absolute blast! This was an awesome week filled with travel, baseball, food, drinks, and babe! Payton was chosen to pitch in the all star game this year, and I am so sooo proud of him! The game was on Wednesday, in O’Fallon Missouri. So I drove up the day before for the Homerun Derby as well. It’s about a 6 hour drive from Cincinnati. After the Derby, we ended up going to a local bar with some of the guys and I had my first actual drink of 2018. Whaaaaaaat?! Haha, yes, drunk off of 1.5 drinks in the hotel before we even got to the bar. Then a couple more vodkees there, and I was feeling good. I’m not a big drinker to begin with, even in the off season, but I don’t drink at all during prep, so my tolerance was 0 at this point. I had a great night with my boyfriend and his friends, didn’t really get a hangover, and enjoyed myself. I’d say day 1 was a success.

The morning of the All Star game the boys had to be gone by 10am for banquet stuff, interviews, and field stuff, so I was on my own all day. I went to the hotel gym for some cardio (all they had) in the morning, and then I took myself on an IHOP date. I already told myself I wasn’t tracking this week, so I didn’t hold back on what I wanted. I took a page out of Payton’s book, and ordered the country fired steak, and it was delicious and bigger than my hand. Hours later after exploring the local target, I went to Panera, where I got the Green Goddess chicken salad. I honestly was craving a salad after the heavy breakfast, but wouldn’t ya know it..my ass ordered the mac n cheese too because fuck it. Then they also gave me two baguettes that I didn’t ask for, but I ate those too because momma always taught me to finish my plate. Lawl. 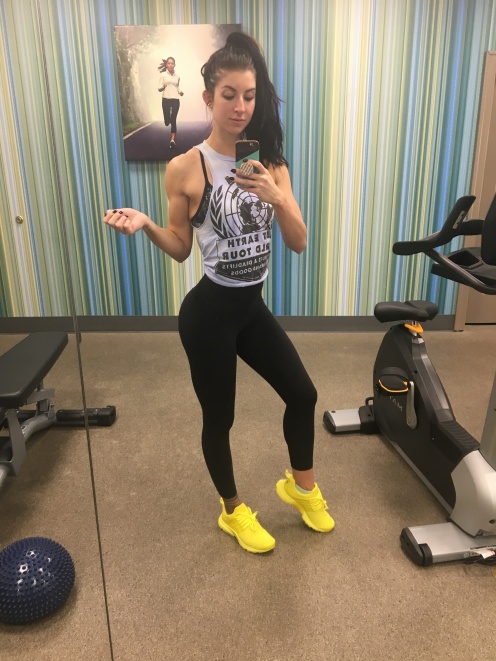 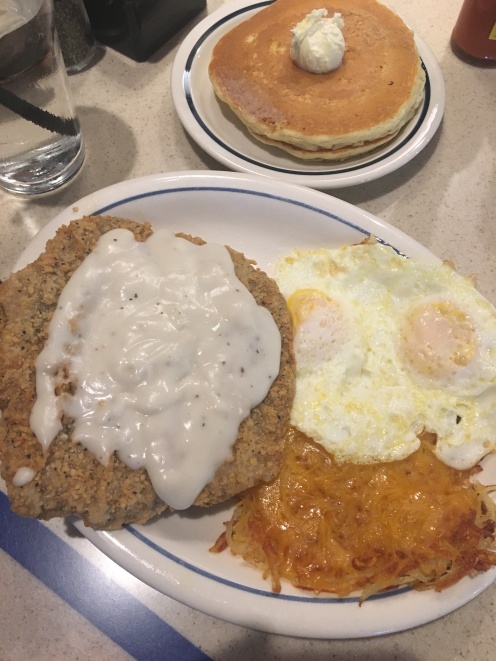 The All Star game was amazing though! It was 93 degrees, but I found a spot in the shade near third base and P’s dugout, so it wasn’t that bad. The vibe of the game was so fun! You could tell all the guys were just loose and enjoying themselves. And why shouldn’t they be?! This game really doesn’t mean anything in terms of season, they were hand picked for the game because their coaches believed in them, and they get to just have fun with other talented dudes! It was super cool to watch. All the pitchers only pitched an inning a piece, but this was cool because then they could all just go “balls out” and throw the cover off the ball, instead of trying to save their arm for 5-6 more innings. “These kids are throwing heat.” (name that movie) 😉 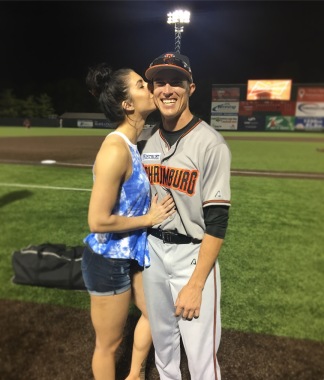 After the game, Payton and I went to BDubs to get some wings and a couple drinks (drinks two nights in a row?! who am I?) I ended up ordering 2 appetizers, but was an idiot and literally ordered the nachos and the chili con queso dip…if you know BDubs, you know that these are literally the same dishes. If you pour the chili con queso on the chips, it IS the nachos. I realized this after I ordered, but it was too late. double nachos it is, haha! oopsie.

As you can tell, my food choices have not been “light” or macro friendly at all. I also had not been lifting this week at all after I had arrived in Missouri. Again, not a big deal, because I haven’t taken more than 3 days off in a row since 2017. Let that sink in. I have been in prep since December of last year, up until July 1st of this year. THIS is why I threw caution to the wind this week, and took a break from the gym and macros. This break won’t kill me, this break won’t ruin everything, but I will be real with myself that I flew off the handle a little too much with the food, but it already happened and I had a good time. The main thing is that I didn’t feel guilty or bad for eating it, I just knew I wasn’t doing my body any favors haha.

The morning after the All Star game, Payton and I got up early and went to CRACKER BARREL BECAUSE IT WAS MY BIRTHDAY WEEEEEE! If y’all know me, I LOVE me some Cracker Barrel! I even went there post show a few times. I have my normal order that I go for almost every time, which is their biscuits and gravy, with a side of the dumplings, and one pancake. Might as well be called Caraline’s Carbtastic Breakfast (CB please sponsor me). BUT, apparently they don’t make the dumplings until 10am, so I had to go with hashbrown casserole instead, which was also great, but still bummed about it. After breakfast, Payton and I started our 5 hour drive back to Schaumburg IL, because his team had practice at 3:30 because THEY had 4 days off for All Star Week. Key word, THEY. The 4 players, including Payton, had to all drive back early in the morning from the All Star game to make it back in time for practice, even though they didn’t get the week off. I’m not bitter. It’s fine. I’m fine.

So I dropped P off at the field, and headed to the house to shower. When he got back, we got ready, and headed to downtown Chicago for my bday dinner and a pit stop ;). We stopped at Chicago Tattoo (whom I found based on recommendation, and had spoken to a few times about walking in tonight). I got my 5th tattoo, and it took all of 10 minutes. My artist was awesome, and I love it. It’s no secret that I’ve had a running theme this year with “moving forward” as my mantra. This is what this tattoo is to me; a constant reminder to keep going, no matter the setbacks, the obstacles, the time it will take, I will always keep moving forward. I am very happy with it!

Quick shoutout to Payton for making my stubborn ass calm down and get this done that day. I almost backed out because since we were a walk in, the wait time was about 40 minutes, then on top of that, I didn’t know how long it would take all together. The restaurant we were going to closed at 10 (it was 7:30 at the time), so I thought we weren’t going to have enough time, and I was being hangry and didn’t want to miss dinner. Payton told me to stop it, and said we were staying and getting it because he knew if I didn’t, I would be mad at myself. Y’all, how did I get so lucky to find a man who knows me better than me? He was right. AND we actually got in within 10 minutes because an appointment didn’t show up! So all together we were in and out in like 25 minutes. I love you Payton, thank you. 🙂

We went to Sushi after, and it was some of the best sushi I’ve ever had! Well worth the drive, and the money. If you’re in downtown, its called Sakura Teppanyaki & Sushi. I highly recommend the Tropical Mango & the Volcano rolls, as well as their White Peach Sangria!

Oooook, if you’re still with me, welcome to the last day of my Birthday Break Week! The day after my birthday, Payton had to leave early for an away series, so I drove another 5.5 hours home to Cincinnati and went out to dinner with my parents. We went to My other top 2 favorite places (CB being the other top 2), Cheesecake Factory! Obviously had to have the brown bread and butter, and we split the egg roll sampler as an app. If you have not tried the egg rolls, PLEASE get this appetizer. Each one is amazing, and the coinciding sauces are bomb! I’m a CF expert, trust me. Moving on. I ordered the Farfalle Chicken and Garlic pasta but subbed alfredo sauce (the parmesan cream sauce is a little more bland, the alfredo is similar but with way more flavor). Also had their Pineapple Moscow Mule, which is my favorite drink there. Also, wow drinks all week long? I am an animal, look out! No cheesecake for me this time because balance. HA! Jk I had homemade chocolate butterscotch cake my mom made when I got home.

So now this brings me to the scale. I am not one to harp on the scale when it comes to progress, but I clearly went a little overboard in terms of sticking to my reverse diet (considering it did not exist this week). My body showed it, the scale showed it, and my energy definitely showed it. The food definitely settled in my stomach and outer thighs this week, which is where my weight gravitates towards always. The scale showed me up 10lbs at one point this week (at the end of the day), but weight this morning after it all, was at 146. Which is about 6lbs above what I had been maintaining post show, and what I was at before getting to Missouri. This isn’t as bad as I thought it was going to be, but nonetheless, my energy took a huge hit, and I am exhausted and craving a vegetable of any kind! This week I am getting back to the gym , my macros and normal meals, and I couldn’t be more happy about it. My check in photos from this morning are below, and you can see the bloat and water I am holding, compared to last week’s check in. I’m not worried about this, because I know I will get right back on the horse and back to normal in the next week or two if that’s what my body allows. 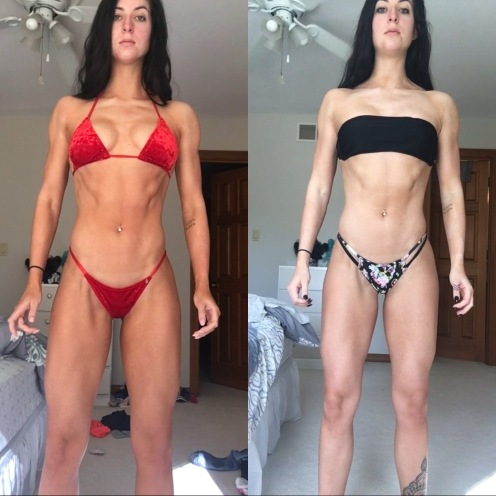 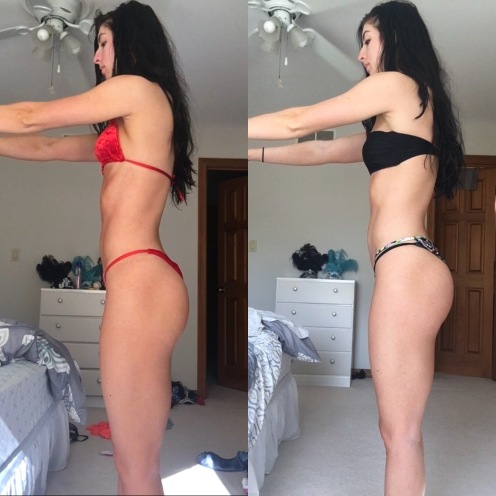 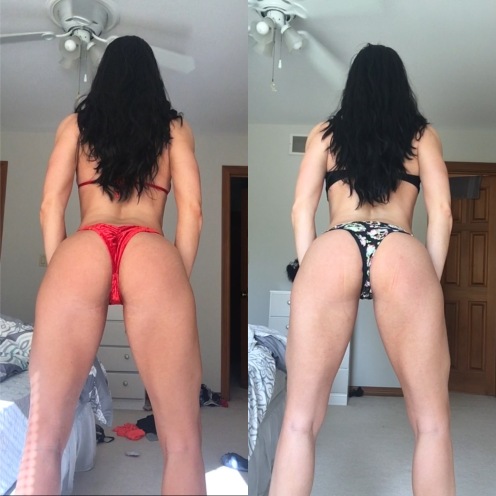 Moral of the story, this week was a freaking blast. 25 is going to be a great year. I gained a decent amount of weight in a short period of time, but I didn’t die, and am right back on track today with no regrets. What have I been saying all year long? Oh yea, moving forward. 😉